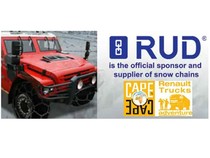 Emphasising its place on the world stage, Renault Trucks has captured the transport industry’s imagination by committing a fleet of its high-end trucks to what will quite possibly be seen as the world-class adventure of 2009. Six Kerax and six Sherpas are heading South from Nordkapp in Norway to the Cape of Good Hope in South Africa. They left Norway on 1st March and they will arrive at Cape South on 8th July 2009. The 30,000 km route which will test the vehicles well beyond conventional working conditions takes the trucks through 17 countries and climatic extremes ranging from sub-zero permafrost and tundra to desert and tropical rain forest.

Both models have been developed for the ‘rough’ trades.

The Kerax is designed to match on/ off-road conditions such as quarries, construction sites and logging while the robust Sherpa has a range of military applications including emergency and armoured personnel transport.

Both models are built to cope in extremes of climate and altitude.

All twelve vehicles are shod with Michelins tyres which are considered ideal for paved roads and hard-surface off-highway routes. However, for conditions when tyres are simply not enough, the Kerax trucks are carrying traction chains type SUPERGREIFSTEG made by RUD .

The snow chains are also the precursors of the Rotogrip

When road conditions become icey, Rotogrip, which is installed in the wheel arches of emergency vehicles, commercial transport and public transport can be deployed and retracted from within the cab with a single press of a button.

SUPERGREIFSTEG is an advanced traction chain developed by RUD to provide traction and keep vehicles moving in deep snow and across soft, boggy ground.

RUD is proud to have been chosen to supply it´s traction chains to Renault’s Cape to Cape expedition and welcomes enquiries for traction chains from all truck operators.

You can follow the Renault Trucks’ progress, download a map and view a series of videos by visiting: www.renault-trucks.info/capetocape

About the RUD GROUP